China and the World Conference

Vanderbilt University in partnership with the University of Tennessee Knoxville, February 2022 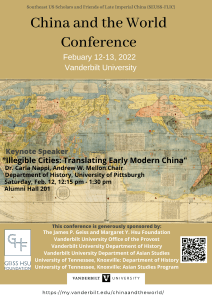 The Southeast US Scholars and Friends of Late Imperial China (SEUSS-FLIC) held an in-person conference at Vanderbilt University in conjunction with a slate of virtual panels organized by the University of Tennessee Knoxville. Panels explored the ways in which China’s late imperial period created the foundation for China’s identity today, and addressed issues in Chinese history, literature, and culture in the context of global connections and comparisons. The conference aimed to forge connections between scholars from institutions within driving distance of Nashville, Tennessee, who may encounter barriers to attending other regional and national conferences.