In Remembrance of the Saints: The Rise and Fall of an Inner Asian Sufi Dynasty by Muhammad Sadiq Kashghari 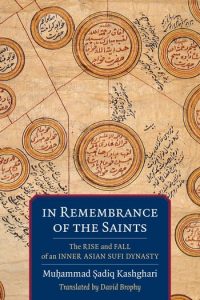 In the first half of the eighteenth century, members of the Naqshbandi Sufi dynasty vied for influence in the Tarim Basin, part of present-day Xinjiang. The ensuing conflict saw the region incorporated into the expanding Qing imperium. Three decades afterward, Muḥammad Ṣadiq Kashghari was commissioned to write an account of these Naqshbandi Sufis and their downfall. Providing a rare local perspective on China’s expansion into Muslim borderlands, this translation sheds light on Xinjiang’s political and religious traditions and makes a foundational work of Inner Asian literature available to students and scholars.