The Board of Directors of the Geiss Hsu Foundation is delighted to announce awards made during the fall 2022 application cycle. These awards support projects and publications that advance scholarship and interpretation of the Ming dynasty and adjacent time periods and peoples.

To increase the visibility of pathbreaking work on Ming China within the broader field of Asian Studies and related disciplines, the Society for Ming Studies will develop and promote a prize for an “outstanding contribution” to the study of Ming China and a prize for a best first book on the Ming. Both prizes will be awarded at the annual meeting.

The University of Washington Press will add two titles to the collection of Geiss Foundation Open Access Books: The Interweaving of Rituals by Nicolas Standaert (2008) and Many Faces of Mulian (2017) by Rostislav Berezkin. These works illuminate the development over time of important social, cultural, religious, and literary trends that took root in the Ming.

Nine graduate students will give ten-minute presentations on their research at the Society for Ming Studies’ Annual Meeting. The initiative aims to encourage Ming research and engagement at the junior scholar level, and bring to the fore questions, research materials, and methodologies that productively challenge and enlarge the study of Ming China.

This workshop examines “nonproducing” skills that have been overlooked in the literature of craftsmanship and artisanal knowledge. The organizers aim to bring the study of skills into conversation with emerging concepts, to contextualize Ming material culture and technology in the transnational and connected history of East Asia and beyond, and to publish select papers.

Academia Sinica and Mount Holyoke College: A Conference on Border-Crossing in the Ming

Graduate students and early-career scholars will attend an in-person, workshop-style conference to foster discussion about border-crossing over the longue durée history of late imperial China. Scholars across academic ranks in Asia and North America will circulate their papers in advance for in-depth discussion, and research will be shared as an open-source publication.

This conference of the Southeast US Scholars and Friends of Late Imperial China will serve as an open space in which Ming and late imperial scholars, students, researchers, and friends can share work with engaged colleagues in a welcoming and supportive environment. Wai-yee Li, 1879 Professor of Chinese Literature at Harvard University, will give a keynote address.

Towers in the Void analyzes the contents, format, and circulation of books in the late Ming and early Qing dynasties and explores how they functioned to connect readers to one another and to the material world. Kile considers writing and materiality together, thereby elucidating issues as varied as spatial ideology, performance practices, gender roles, and the genre of short vernacular fiction.

This book’s central claim is that the act of inscribing an object with lines of prose and verse became, in the late Ming and early to mid-Qing dynasties, a central means through which writers grappled with the material contingencies and technical preconditions of writing in general, a space where they came to reflect upon their investments in, and dependencies on, the permanence of the written word.

Columbia University Press: The Precious Summary: A History of the Mongols from Chinggis Khan to the Qing Dynasty by Sagang Sechen, translated by Johan Elverskog

What became of the Mongols after the glories of the empire? The Precious Summary, written by Sagan Sechen in 1662, shortly after the Mongols’ submission to the Manchu Qing dynasty (1644-1912), offers an unparalleled historical perspective on what happened in China and Inner Asia from the late fourteenth century to the founding of the Qing dynasty in the early seventeenth century.

University of Hawai’i Press: Remapping the World in East Asia: Toward a Global History of “Ricci Map,” edited by Mario Cams and Elke Papelitzky

Remapping the World in East Asia aims to rewrite the narrative surrounding the “Ricci Map,” which assumes that a Jesuit missionary taught the Chinese what the world looked. The volume presents a thoughtful revision, contextualizing and displacing the Jesuit missionary as the central historical actor and questioning assumptions of the superiority of European science.

GHF awarded funding to the Association for Asian Studies (AAS) to support participant travel to the 2023 Annual Conference in Boston, MA.

The Geiss Hsu Annual Conference Travel Grant will award up to $2,000 each in travel support to scholars who engage in research related to the Ming. Applicants do not need to be AAS members or part of an organized session. Preference will be given to contingent or part-time faculty, students, and independent scholars.

Visit the AAS website for more information and application requirements. Applications are due to AAS Executive Director Hilary Finchum-Sung (hvfinchum@asianstudies.org) by December 10, 2022. 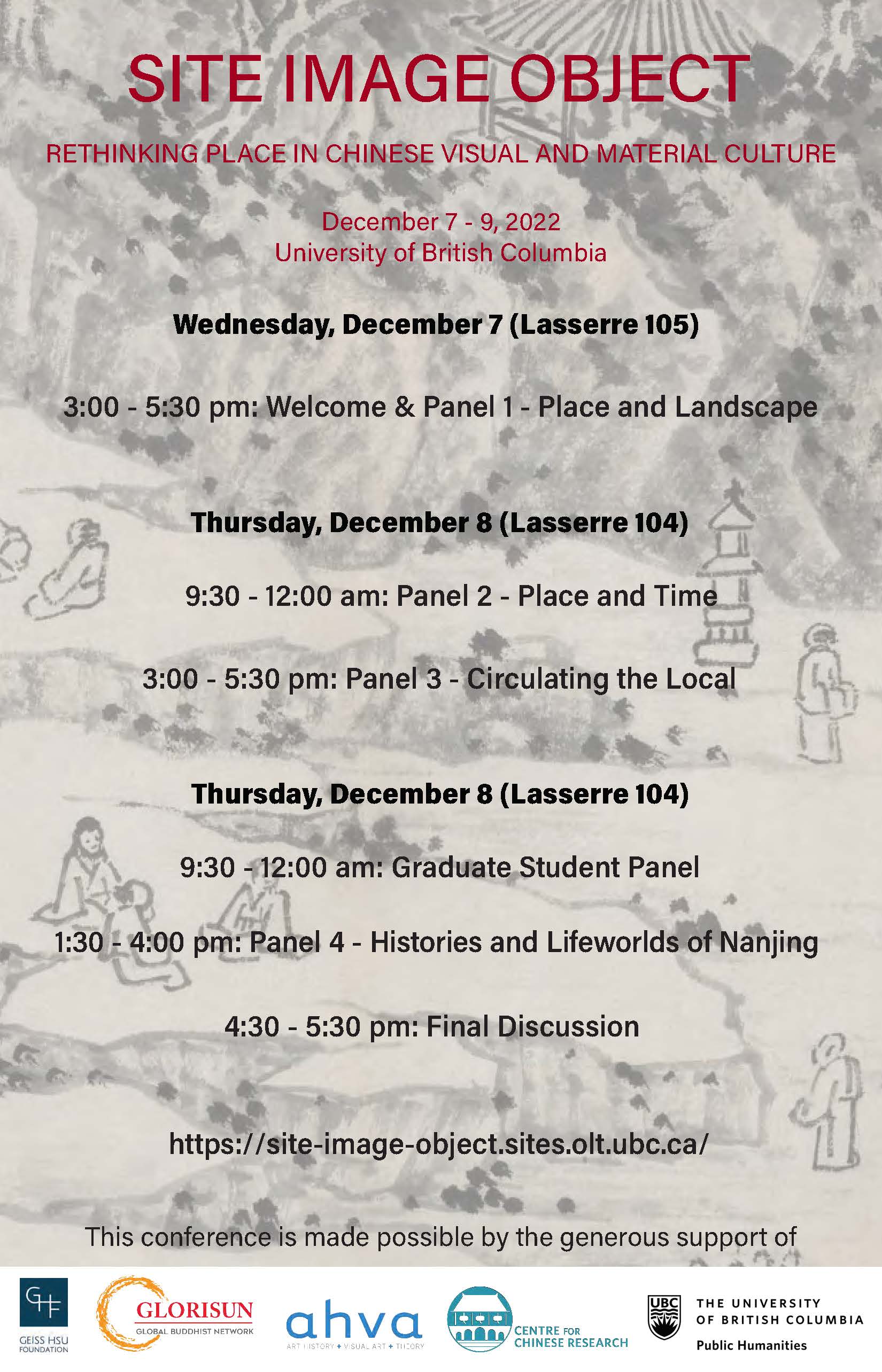 “Places are constructed and experienced as material ecological artefacts and intricate networks of social relations. They are the focus of the imaginary, of beliefs, longings, and desires (….). They are an intense focus of discursive activity, filled with symbolic and representational meanings, and they are a distinctive product of institutionalized social and political-economic power.” (David Harvey, Justice, Nature, and the Geography of Difference)

The conference Site-Image-Object: Rethinking Place in Chinese Visual and Material Culture examines how place is shaped by artistic production, and how, at the same time, visual and material expressions shape place and its perception. “Place” here is not an existing given, to which art reacts or that it depicts; rather, we conceive of the interaction between place, its representations, its products, and its architectural framing as a continuously evolving process.

Individual papers address visual representations of place in painting, print, maps, and photography; local products and architectural styles that carry imaginations about their place of origin as they circulate; and sites of religious and cultural significance as agents in artistic production. Considering questions of temporality, narrative, biography, sensory knowledge, remembrance, revival, geographical imagination, networks and circulation, the aim of the conference is to rethink approaches to Chinese landscapes, cityscapes, and religious topography.

The conference brings together early- and mid-career scholars of Chinese art and culture, whose recent and ongoing work is contributing to a methodological shift in the field as they engage with place. By embracing a long temporal span from the Middle Period to the twenty-first century, the conference facilitates scholarly exchange and collaboration to explore the continuities and discontinuities in Chinese cultural production centred on place as a methodological framework. A graduate student panel provides a platform for emerging voices in the field and offers opportunity for professional development and mentorship.

This in-person conference is free and open to the public but registration is required. Please register here by November 30, 2022.

We are pleased to welcome Pauline Yu, President Emeritus, American Council on Learned Societies, to the Geiss Hsu Foundation Board. Dr. Yu will begin her three-year term in September.

Mid-career, senior, and emerging scholars from all areas of the humanities with a strong record of peer-reviewed work are encouraged to apply. In partnership with the James P. Geiss and Margaret Y. Hsu Foundation, the Center welcomes fellowship applications from scholars engaged in the study of early modern China and its world, during and adjacent to the Ming dynasty (1368–1644).

Scholars from all parts of the globe are eligible; stipends and travel expenses are provided. Fellowship applicants must have a PhD or equivalent scholarly credentials. Fellowships are supported by the Center’s own endowment, private foundation grants, contributions from alumni and friends, and the National Endowment for the Humanities.

The National Humanities Center does not discriminate on the basis of race, color, sex, gender identity, religion, national or ethnic origin, handicap, sexual orientation, or age. We are dedicated to fair treatment, diversity, and inclusion.

The National Humanities Center is one of the world’s leading centers for advanced study and the only independent institution of its kind dedicated exclusively to the humanities. For over four decades, the Center has encouraged excellence in scholarship and teaching while constantly affirming the vital importance of the humanities in American life.

Plum Shadows and Plank Bridge: Two memoirs about Courtesans (Columbia University Press, 2020), edited and translated by Wai-yee Li, won the Association for Asian Studies’ Patrick D. Hanan Book Prize for Translation, given biennially to an outstanding English translation of a significant work in any genre originally written in Chinese or an Inner Asian Language, from any time period.

What the Emperor Built: Architecture and Empire in the Early Ming (University of Washington Press, 2020) by Aurelia Campbell was named honorable mention for the Society for Architectural Historians’ 2022 Alice Davis Hitchcock Book Award for the most distinguished work of scholarship in the history of architecture published by a North American scholar.

Congratulations to Professors Li and Campbell!

The Geiss Hsu Foundation is pleased to announce a three-year partnership with the National Humanities Center to provide residential fellowship support to a scholar of early modern China and its world, beginning with the 2023–24 academic year and concluding in 2025–26. Applications open July 1.

For more information about the partnership and the application process, visit this link.

The Board of Directors of the Geiss Hsu Foundation is delighted to announce awards made during the spring application cycle. These awards support publications, exhibitions, and conferences that advance scholarship and interpretation of the Ming dynasty and adjacent time periods and peoples.

China Institute in America: Flower on a River: The Art of Chinese Flower and Bird Painting, 1368-1911 – Masterworks from Tianjin Museum and Changzhou Museum

University of British Columbia, Centre for Chinese Research: How is China Governed? From Ming Statecraft to Xi’s New Era

Cornell East Asia Series, an imprint of Cornell University Press: Bandits in Print: The Water Margin and the Transformations of Vernacular Fiction by Scott Gregory