The City of Blue and White: Chinese Porcelain and the Early Modern World 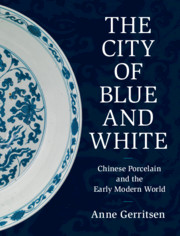 The vast majority of the porcelain that circulated throughout the early modern world was made in Jingdezhen. This book traces the development of this remarkable city from its earliest beginnings at the end of the tenth century, when Jingdezhen first emerged as site of imperial production, through the appearance of the first blue-and-white wares in the Yuan dynasty (1275–1368), to the height of its flourishing in the eighteenth century.