Korea and Vietnam before the Twentieth Century: Comparisons and Connections

This international conference seeks to foster dialogue between specialists of Korean and Vietnamese humanities. It will consist of eight panels, each featuring a pair of specialists, one working on Vietnam, the other working on Korea, who will give thematically-linked presentations on a common area of study: Pedagogy and Learning; Book History; Literacy and Poetic Culture; Political Legacies; Vernacular Culture; Popular Fiction; Environmental History; and Frontiers and Borders. It will also include a round-table on rare materials collections and digital source material. Several projects will be selected for publication in a special issue of a journal. 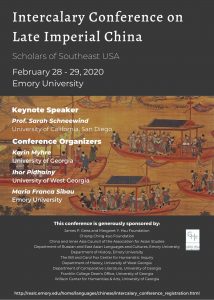 Complementing the British Museum’s exhibition, Ming: 50 Years that Changed China, this major conference brought together more than 30 Ming scholars from across the globe, who presented new perspectives and research papers about the Ming spanning 1400–1450. Focusing on the aftermath of the Zhu Yuanzhang’s overthrow of the Mongol Yuan dynasty, the conference examined the role of China’s imperial and provincial princely courts, and discussed China’s relations and exchanges with other parts of the world.

Held at St. John’s College and the Institute of Asian Research at the University of British Columbia, the conference explored the different types of biography in East Asian countries from 1400 to 1900. Presenters challenged the traditional position maintained by past studies that the biography in China and Korea was simply a means to compartmentalize individual lives into pre-established moral categories. Papers and panel discussions examined the ways in which various standard biographies, public or private, treated their subjects. Ming Studies published a summary of the conference (2013, issue 68), and the research presented was collected in Representing Lives in China: Forms of Biography in the Ming-Qing Period, 1368-1911 (Cornell University East Asia Program, 2018).

History with Chinese Characteristics: From Ming to Globalization

Held in honor of Edward “Ted” Farmer’s retirement from the University of Minnesota after 43 years of teaching, the two-day “mini-conference” covered a broad range of topics, including Chinese culture, Ming institutions, world history, and modern China.

The Geiss Hsu Foundation fully-supported and conducted the Ming Provincial Courts Conference, held at Colgate University in Hamilton, New York. Nine scholars from the United Kingdom, the Netherlands, China, and the United States presented papers and discussed the courts of imperial clansmen outside Beijing. Participants drew attention to their patronage of painting, religion, scholarship, as well as the courts’ social, economic, and military dimensions. Some papers delivered at the conference were published in Ming Studies Volume 12, Issue 65.